Author
Marina Walter
UN
Resident Coordinator
marina.walter@one.un.org
Prior to her appointment as Resident Coordinator for Suriname, Ms. Walter was Country Director a.i. and Deputy Director of UNDP in India from 2015. Prior to joining UNDP India, she was the Deputy Resident Representative for UNDP Thailand from 2013 to 2015. Ms. Walter holds a Master of Arts in Comparative Politics from Vanderbilt University in the United States. 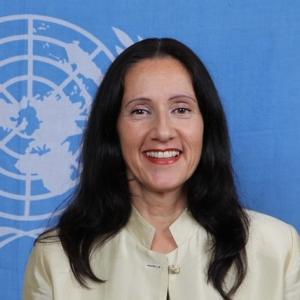 Coordinating development operations promotes more strategic support for national plans and priorities, makes operations more efficient and reduces transaction costs for governments. This helps the UN to be a more relevant and reliable partner for the Government of Suriname.

The United Nations system in Suriname is represented by Ms. Marina Walter; she is the UN Resident Coordinator for Suriname, Trinidad and Tobago, Aruba, Curaçao and Sint Maarten.

The UN Resident Coordinator in Suriname

Prior to her assignment as United Nations Resident Coordinator for Trinidad and Tobago, Suriname, Aruba, Curaçao and St. Maarten, Ms. Walter served as Country Director a.i. and Deputy Country Director of the United Nations Development Programme (UNDP) in India from 2015 to 2018. Ahead of that, she was the Deputy Resident Representative of UNDP in Thailand, where she started in 2013. Ms. Walter also served for five years as the Deployment Coordinator of UNDP’s global emergency rapid response programme (SURGE) in New York and managed UNDP’s Civil Service Leadership Development in Kabul, Afghanistan, for two years. Ms. Walter has also held positions in different parts of the UN system in capacity building, resource mobilization, public private partnerships, and training, work which led her to Africa, Asia, and Europe. Prior to her joining the United Nations in 1996, Ms. Walter worked as a journalist in Berlin, Germany.

She speaks German, French, and English.